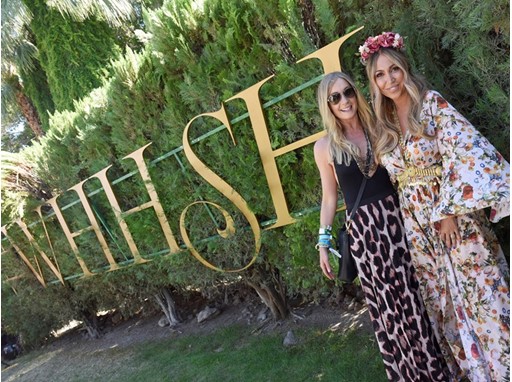 #WHHSH Beer captures the essence of Las Vegas and adult freedom. Crafted locally in Las Vegas by Tenaya Creek Brewery, #WHHSH Beer is an easy drinking, pale ale with hints of citrus and pine creating a cool, clean finish. The exclusive beer will only be available at select Las Vegas sponsored events. #WHHSH Beer is the first of Las Vegas’ limited edition #WHHSH products to be introduced.

After performing one of Friday’s most sought after sets at the festival, headliner G-Eazy met up with Amber Rose where the two were seen laughing and chatting as they sipped #WHHSH cocktails together. Kellan Lutz arrived shortly after and mingled throughout the party, stopping to play ping-pong as revelers cheered him on. Additional celebrities, including Ed Westwick, Icona Pop, Bob Moses, J Sutta and more joined influencers and guests alike to party in true Las Vegas style.

As guests and celebrities made their way through the party, they chose their signature photo opp: a picture in front of the #WHHSH beer step-and-repeat adorned with dozens of the sleek black and white cans, a stacked “What Happens Here, Stays Here” logo and simply #WHHSH.

Attendees also experienced Only-in-Vegas moments at the Vegas VR bar, where they were instantly transported to the hottest Las Vegas attractions. Once they came back to reality, partygoers were treated to exquisite hairstyle creations by Green Valley Ranch Resort, Spa & Casino and Red Rock Casino, Resort & Spa at their pop-up braid bar complemented by glitter and fresh floral.

Right as the party was really revving up, excitement levels hit an all-time high as Icona Pop went on-stage for an exclusive set, singing hits such as “I Love It.” After a #WHHSH toast with all partygoers, the duo jumped in the pool, splashed in the water and posed with guests.

As Icona Pop warmed up in the sun and sipped on their #WHHSH beers, Palms Casino Resort’s “Ditch Fridays” DJ, Mark Stylz, kept the party going for the rest of the day with a strong set that can only come from Las Vegas.

DNCE, Joe Jonas’ band, was seen striking up conversations with fans and friends as they made their way to the #WHHSH stage to perform an energetic set. They were soon joined by Kat Graham of "The Vampire Diaries," who met them onstage. Graham then made her way through the party, as she greeted friends and fans and danced to the music for the rest of the day.

"Downton Abbey’s" Joanne Froggatt was also spotted playing oversized beer pong and Strangers We Know, fresh from their performance at the festival the day before, made their way through the party striking poses and sipping #WHHSH beer along the way. Olympic gymnast Josh Dixon and travel influencer Brian Kelly, The Points Guy, were also seen experiencing Vegas VR.

All guests were treated like VIPs with massages and hand treatments provided by the Spa at The Linq Hotel & Casino. After entering a state of relaxation, partygoers enjoyed an array of culinary creations by SkinnyFATS, a local Las Vegas eatery.