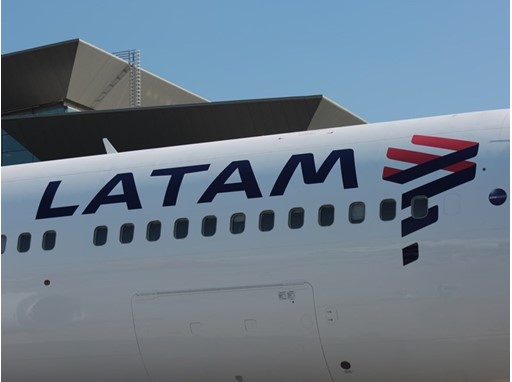 LAS VEGAS --  LATAM Airlines Group, the leading airline group in South America, today announced that its Brazilian affiliate, LATAM Airlines Brazil, will begin nonstop seasonal service to Las Vegas in June 2018, marking the first scheduled nonstop flight to Las Vegas from Brazil.
Beginning June 21, 2018, the route will depart Sao Paulo every Monday, Thursday and Saturday and will arrive in Las Vegas the following morning. The return from Las Vegas to Sao Paulo will take place every Tuesday, Friday and Sunday. The seasonal flight will operate through August 30, 2018.
In addition to economy fares, travelers will have the option of business class fares with 180 degree flat seats.
LATAM Airlines Group’s carriers currently offer 1,300 daily flights to 140 destinations in 25 countries and transports 67 million passengers per year.
Brazil represents Las Vegas’ seventh strongest overseas market and is the greatest source of international visitation from South America, welcoming more than 150,000 travelers annually.
"No other airline group connects South America with the world with such offers of itineraries and time options. On average, LATAM Airlines Brazil carriers launched one new flight per month to destinations in Brazil and abroad this year", says Jerome Cadier, CEO of LATAM Airlines Brazil. "Las Vegas and all four other new international destinations we have announced for 2018 reflect our commitment to evaluate every opportunity and to invest in sustainable operations that truly facilitate and expand travel options for the customer."
“We are thrilled to welcome a seasonal nonstop service between Sao Paulo and Las Vegas for the first time with our newest airline partner, LATAM Airlines Brazil,” said Rossi Ralenkotter, president/CEO of the Las Vegas Convention and Visitors Authority (LVCVA.) “Expanding air service is a long-term process, and we celebrate this important milestone with LATAM Airlines Brazil, McCarran International Airport and with our resort and allied partners.”
“Brazil has long been among our most sought-after markets, so we are very excited for our new partnership with LATAM Airlines Brazil and look forward to McCarran International Airport being its first west coast destination from Sao Paulo,” said Clark County Aviation Director Rosemary Vassiliadis, who oversees operations at the eighth-busiest airport in the United States. “We recently increased capacity for international arrivals and are working to expand amenities that cater to international travelers, such as duty-free retail and a first-class airport lounge.”
Las Vegas currently welcomes more than 200 weekly nonstop flights from 21 foreign cities in 11 countries by 16 carriers.
About LATAM Airlines Group
LATAM Airlines Group is Latin America’s leading airline group with one of the largest route networks in the world, offering air services to around 140 destinations in 25 countries, and is present in six domestic markets in Latin America: Argentina, Brazil, Chile, Colombia, Ecuador and Peru, in addition to its international operations in Latin America, Europe, the United States, the Caribbean, Oceania and Africa.The Group employs over 43,000 people worldwide, operating more than 1,300 flights per day and transporting 67 million passengers per year. LATAM Airlines Group has a young and modern fleet. Its 306 aircraft average an age of around seven years and feature the latest models including the Boeing 787, Airbus A350, A321 and A320neo. LATAM Airlines Group (formerly LAN Airlines) comprises affiliates in Peru, Argentina, Colombia and Ecuador as well as LATAM CARGO and its affiliates; in addition to TAM S.A and its affiliates, TAM Linhas Aéreas S.A. (LATAM Airlines Brazil) and its business units TAM Transportes Aéreos Del Mercosur S.A. (LATAM Airlines Paraguay) and Multiplus S.A. LATAM is the brand adopted by LATAM Airlines Group member airlines and is being rolled-out in its products and services, as part of a gradual integration plan. LATAM Airlines Group is the only airlines group in Latin America and one of three worldwide to be part of the Dow Jones Sustainability ‘World’ Index.  In 2017, it was recognized by the index for sustainable practices, based on economic, social and environmental criteria, for the fourth consecutive year. LATAM Airlines Group shares are traded on the Santiago Stock Exchange and the New York Stock Exchange in the form of ADRs. For any commercial or brand related query, visit www.latam.com. Further financial information is available via www.latamairlinesgroup.net
About LVCVA
The Las Vegas Convention and Visitors Authority (LVCVA) is charged with marketing Southern Nevada as a tourism and convention destination worldwide, and also with operating the Las Vegas Convention Center and Cashman Center. With nearly 150,000 hotel rooms in Las Vegas alone and more than 11 million square feet of meeting and exhibit space citywide, the LVCVA's mission centers on attracting ever increasing numbers of leisure and business visitors to the area. Download the virtual reality app, Vegas VR, to experience Las Vegas from your iPhone or Android by visiting http://www.vrtv.vegas/. For more information, go to www.lvcva.com or www.visitlasvegas.com.
About McCarran International Airport
McCarran International Airport is located in the shadows of the world-famous Las Vegas Strip and is the gateway for nearly half of the people who visit Southern Nevada each year. Including arrivals and departures, McCarran hosted more than 47.4 million passengers in 2016, making it the eighth-busiest airport in North America. With nearly 30 airlines providing nonstop service to more than 130 destinations, McCarran makes it possible for the world to experience one of the most alluring travel destinations. McCarran International Airport is owned and operated by Clark County, Nevada, and does not benefit from local tax dollars.