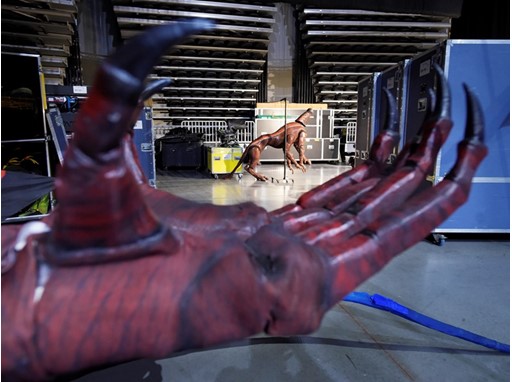 LAS VEGAS -- Cirque du Soleil this week offered media a peek behind the curtain into the world of "Toruk -- The First Flight," a production inspired by James Cameron’s "Avatar." In Las Vegas for a limited run Jan. 18-22, 2017, at the T-Mobile Arena, "Toruk" transports the audience to the world of Pandora in a visually stunning live setting. Through a riveting fusion of cutting-edge visuals, puppetry and stagecraft buoyed by a soaring cinematic score, Cirque du Soleil applies its unique signature style to Cameron’s imaginary world and “makes the bond” between two kindred artistic visions that capture the imagination. Narrated by a “Na’vi Storyteller” and populated by unforgettable characters, "Toruk – The First Flight is a mythical tale set thousands of years before the events depicted in the film "Avatar," and before any humans ever set foot on Pandora. Photography by Sam Morris/Las Vegas News Bureau.