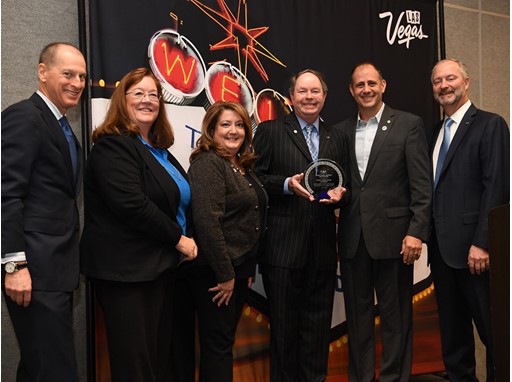 LAS VEGAS- World Trade Center Las Vegas (WTC Las Vegas) is celebrating 10 years of operation in January and and the organization marked the occasion during an exclusive breakfast event during CES® 2020. In honor of this landmark anniversary, WTC Las Vegas has partnered with the World Trade Center Association (WTCA) to create the first-ever global CES delegation program. Response to this effort resulted in participation from 20 World Trade Centers across the world bringing nearly 150 attendees and exhibitors to Las Vegas to experience CES.

Special presentations from key leaders of the Consumer Technology Association (CTA), Las Vegas Convention and Visitors Authority (LVCVA) and the WTCA were delivered during the breakfast event in recognition of WTC Las Vegas’ decade of successful operations and innovative programs. The WTCA also presented WTC Las Vegas with an award for their commitment to driving business opportunities worldwide.

WTC Las Vegas is a partnership between the LVCVA and CTA, owner and producer of CES®, the world’s largest and most influential global technology event. In addition to marketing and branding Southern Nevada as the leading tourism and convention destination worldwide, the LVCVA operates the Las Vegas Convention Center, the nation’s only convention center designated as a World Trade Center site and one of the largest convention centers in the United States. Together, the LVCVA and CTA market Las Vegas to business travelers around the globe under the World Trade Center brand.

CES 2020 is projected to attract more than 170,000 attendees with and estimated total economic impact of $283.3 million. Since 1978, CES has drawn 4.7 million visitors to Las Vegas and has had an estimated $5.7 billion economic impact on the destination.