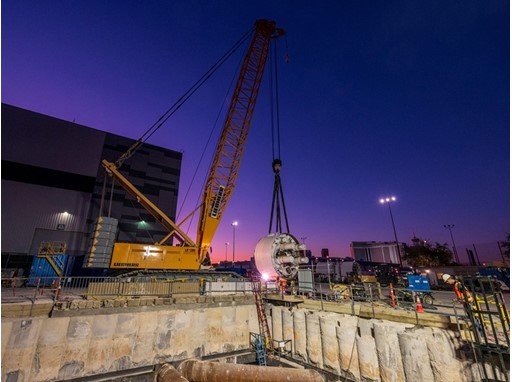 Get an Up-Close Look at The Boring Machine 40 Feet Below the Ground
**Click here to view updated renderings and exclusive timelapse video of The Boring Machine being assembled**
WHAT: The Las Vegas Convention and Visitors Authority (LVCVA) is ready to mark an exciting milestone as tunneling begins for the Las Vegas Convention Center’s (LVCC) underground people mover.  Be a part of history when The Boring Machine is turned on 40 feet below ground as Elon Musk’s The Boring Company starts tunneling on its first commercial project.  The innovative transportation system will allow convention attendees to be whisked across the LVCC’s sprawling 200-acre campus in approximately one minute.
The $52.5 million underground people mover will include three passenger stations connecting the existing 3.2 million square-feet of convention space with the LVCC’s new 1.4 million square-foot West Hall currently under construction, part of a $1.52 billion expansion and renovation. When completed in January 2021, the underground people mover will be comprised of two vehicular tunnels with an expected total length of approximately one mile each. The system will have the potential to expand and link key visitor attractions throughout Las Vegas including Downtown Las Vegas, Las Vegas Boulevard Resort Corridor, McCarran International Airport and beyond.

WHEN: FRIDAY, NOVEMBER 15
Media Arrival: 12:00 P.M. SHARP
1) Exclusive tour of The Boring Machine 40 feet below the ground. Photographs, video, and stand-ups will be allowed during this time.
**All invited media will need to check-in and be assigned Personal Protective Gear. Late arrivals will not be permitted on tour.
2) Q&A With Steve Hill and Steve Davis immediately following the tour.
3) Tunneling launch event starts promptly at 3:00 P.M. with media and invited guests.
WHERE: Las Vegas Convention Center
Red Lot, South Hall Entrance, Las Vegas, NV 89109. Intersection of Swenson & Desert Inn, follow event signage. Parking for media will be provided at the event site.
WHO: Interview Opportunities
Media Moments
RSVP: **SPACE IS LIMITED**
Please contact Jackie Dennis at 702-408-2759 or jdennis@lvcva.com
ABOUT THE LVCVA
The Las Vegas Convention and Visitors Authority (LVCVA) is charged with marketing Southern Nevada as a tourism and convention destination worldwide, and also with operating the Las Vegas Convention Center. With nearly 150,000 hotel rooms in Las Vegas alone and more than 11 million square feet of meeting and exhibit space citywide, the LVCVA's mission centers on attracting ever increasing numbers of leisure and business visitors to the area. For more information, go to www.lvcva.com or  www.visitlasvegas.com.
###