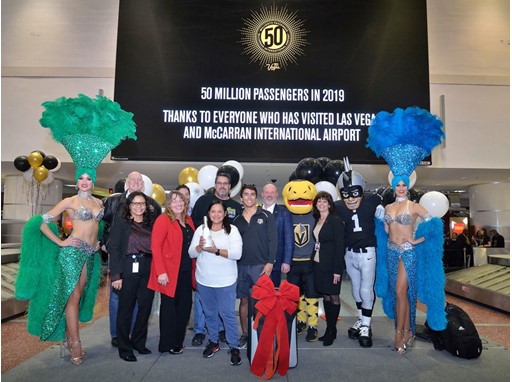 LAS VEGAS – McCarran International Airport today welcomed its record 50 millionth passenger of 2019, a first in the airport’s 71-year history. This marks the third consecutive year the airport will set an all-time passenger record, the previous was set in 2018 with 49.7 million. The all-time high for passengers in a single month was also achieved twice during the course of the year, in May and October respectively.

"Reaching the 50 million passenger milestone is a momentous occasion for our airport and the Southern Nevada community at large," said Rosemary Vassiliadis, Clark County Director of Aviation. "The whole team at McCarran is so grateful to those 50 million passengers who chose to fly to Las Vegas. Over the past decade we have invested heavily in McCarran, from the opening of Terminal 3 to the various renovations in Terminal 1, to help sustain our standing as a world class airport worthy of this destination. We know McCarran is the first and last look at Las Vegas for travelers, and the airport experience influences their decision to return. With this achievement, we can say confidently we are not just meeting, but exceeding passenger expectations.”

Allegiant flight #91 arriving from San Antonio, Texas, served as the ceremonial flight commemorating this achievement. Upon arrival at the gate, passengers were treated to a true Las Vegas VIP welcome including a water cannon salute, gift bags and showgirls. These travelers were then personally escorted to Terminal 1 Baggage Claim where a complete party takeover welcomed them with entertainment from the Viva Las Vegas dancing showgirls, the Raiders organization and the Vegas Golden Knights in-arena crew.

One lucky passenger, Hilda Black, was chosen as the honorary 50 millionth passenger. She is representative of all those who traveled through McCarran in 2019. In addition to the celebratory activities of the afternoon, she received a Las Vegas themed prize pack courtesy of various corporate partners. Hilda traveled to Las Vegas with her husband, Robert, and son, Logan, who recently turned 21.

“This is a great way to start the trip to Vegas,” said Black. “I love Vegas and try to come out a couple of times a year. I’ve never been to an airport where they throw a party like this. McCarran will always have a special place in my heart.”

The milestone of surpassing 50 million passengers is the culmination of nine consecutive years of growth that began as the country rebounded from the economic downturn that marked the beginning of the decade. It is a testament to Las Vegas’s ability to continually add entertainment and business opportunities to draw more visitors each year.

“Las Vegas is the world’s premier destination for business and leisure, but we couldn’t continue to grow visitation and maintain our reputation for superior customer experience without the team at McCarran International Airport and their relentless dedication to overall excellence,” said Steve Hill, CEO and president of the Las Vegas Convention and Visitors Authority. “In the next couple of years, Las Vegas will see more than $15 billion in new development, including new resorts, convention and meeting space, sports events and venues and more. As we enter a period of massive growth across the destination, we’re excited to continue working with our partners at McCarran to increase accessibility to Las Vegas.”

The finalized 2019 passenger count will be released in January 2020.