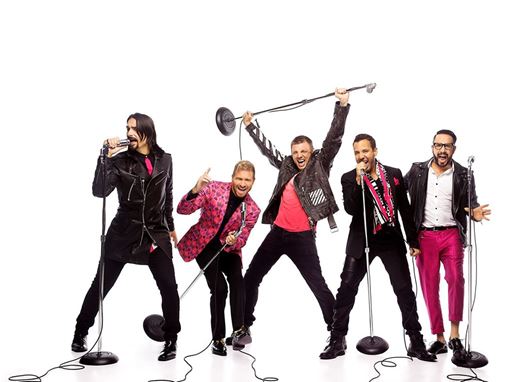 Fans Flock to “Entertainment Capital of the World” for
Only-in-Vegas Music and Stage Experiences
LAS VEGAS — Wrapping up another record-breaking year, Las Vegas will continue its reign as the “Entertainment Capital of the World” in 2017 thanks to non-stop performances by internationally known headliners as well as breathtaking stage shows. Opening in the coming months, visitors will be able to enjoy numerous new, only-in-Vegas entertainment offerings in the new year.
“Visitors from around the world come to Las Vegas for the wide array of phenomenal entertainment the destination offers,” said Cathy Tull, senior vice president of marketing for the Las Vegas Convention and Visitors Authority. “We look forward to welcoming these new headliners and their fans to the destination in 2017.”
Pop sensation Backstreet Boys will kick-off its highly anticipated Las Vegas residency, “Backstreet Boys: Larger Than Life,” Wednesday, March 1. Adding to an already impressive lineup of performers, the GRAMMY Award nominated group’s residency will take place at The AXIS inside Planet Hollywood Resort & Casino, which was recently recognized as the top selling music venue in the United States.
Serving as the gateway to the newest entertainment district along the Strip, the recently opened Park Theater at Monte Carlo Resort and Casino will be home to numerous limited engagements and residencies by internationally known superstars. The dynamic new theater will welcome four-time GRAMMY Award-winner Bruno Mars for performances on; March 11-12 and Sept. 2-3, 2017.
Oscar, Emmy, GRAMMY and Golden Globe Award-winning Goddess of Pop Cher will return to Vegas to debut CLASSIC CHER, an all-new residency featuring her chart-topping classics at Park Theater, on Wednesday, Feb. 8. Recently announced, Latin superstar Ricky Martin will also bring a high-energy and thrilling headlining residency to the vibrant music venue, starting on Wednesday, April 5.
Inspired by the films “Magic Mike” and “Magic Mike XXL,” the new MAGIC MIKE LIVE LAS VEGAS production will offer a complete re-imagination of the male revue based on the hit movies. Conceived and directed by Channing Tatum, the show promises an immersive, first-class entertainment experience complete with sexy and daring themed dance routines and one-of-a-kind acts from a diverse cast of performers. The sizzling spectacular will open on Thursday, March 30 at Club Domina, the real life version of the club at the foundation of “Magic Mike XXL,” located inside Hard Rock Hotel & Casino.
“King of Country Music” George Strait announced he will extend Strait to Vegas, his exclusive concert series at T-Mobile Arena in Las Vegas, for eight additional dates. The country icon will wow audiences with all 60 of his No. 1 hits during the limited engagement, which will consist of four weekends of back-to-back performances. Exclusively performing in Las Vegas, Strait will return Feb. 17-18, April 7-8, July 28-29, Sept. 1-2 and Dec. 8-9.
Las Vegas is home to iconic performers such as Lionel Richie, Celine Dion, Rod Stewart, Elton John, Carlos Santana and more. The destination recently ushered in a new era of entertainers with residencies by chart-topping artists Britney Spears, Jennifer Lopez, Boyz II Men and Mariah Carey. Fans can also catch Reba, Brooks & Dunn, which is the destination’s longest running country music residency.
###
ABOUT THE LVCVA
The Las Vegas Convention and Visitors Authority (LVCVA) is charged with marketing Southern Nevada as a tourism and convention destination worldwide, and also with operating the Las Vegas Convention Center and Cashman Center. With 150,000 hotel rooms in Las Vegas alone and nearly 11 million square feet of meeting and exhibit space citywide, the LVCVA's mission centers on attracting ever increasing numbers of leisure and business visitors to the area. For more information, go to www.lvcva.com or www.LasVegas.com.