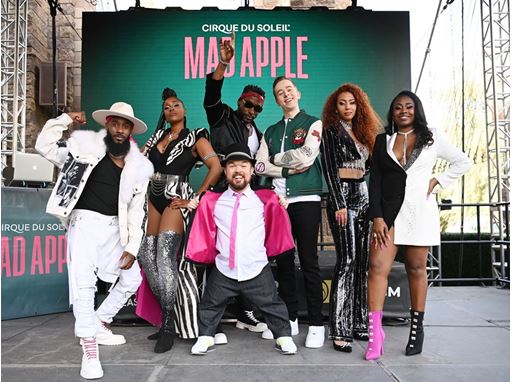 Vegas Knight Hawks Inaugural Season to Start March 18
The Vegas Knight Hawks, an Indoor Football League (IFL) franchise operated by the Foley Entertainment Group, recently announced the full 16-game schedule for their inaugural season in 2022. The Knight Hawks will start the season at home at the new, state-of-the-art Dollar Loan Center on Friday, March 18 vs. the Northern Arizona Wranglers. The March 18 Knight Hawks opener will be the second event hosted at The Dollar Loan Center, a new 6,000-seat sports and entertainment arena currently under construction in Henderson. The Dollar Loan Center will open March 8 when it hosts the Big West basketball championships. For more information, including full schedule, visit KnightHawksFootball.com.

BOOMBOX! A Vegas Residency on Shuffle Brings the Party to Westgate Las Vegas Resort & Casino
Las Vegas will be the ultimate destination for ‘80s, ’90s, and ‘00s music fans this spring with “BOOMBOX!” at Westgate Las Vegas Resort & Casino May 11 – 15 and May 18 – 22. This Vegas residency on shuffle will feature live performances from some of the most iconic artists from the past few decades, including CeeLo Green, Naughty By Nature, Kid ‘N Play, J.J. Fad and Thea Austin of SNAP! In addition to high-energy performances of their own multi-generational hits, the artists will alternate back-and-forth and collaborate on the concert stage together, accompanied by a live DJ and drummer, nostalgic videos, dancers, and a whole lot more. For more information, contact Kelly Frey, KF Publicity, kelly@kfpublicity.com.

Villa Azur Brings One-of-a-Kind Dinner Party Experience to Las Vegas This Summer
A new restaurant and lounge opening this summer will immerse patrons in an experience of authenticity and elegance by pairing the upscale European lifestyle with the vibrant Miami touch in a lively space at Grand Canal Shoppes inside The Venetian® Resort Las Vegas. The destination, Villa Azur, will serve a feast for the senses, delivering a unique experience each night with upscale cuisine in a high-energy ambiance that inspires guests to dance the night away. At the cornerstone of the Villa Azur experience is the food, featuring a taste of the south of France and the east coast, pairing seasonal ingredients and international flavors with stunning presentation. Villa Azur will bring a little bit of extravagance with late night entertainment, glamorous greeters, DJs, musicians, dancers and other entertainers performing throughout the restaurant, evoking the effervescence of an authentic cabaret and giving guests the energy and after-dinner vibe of the French Riviera. For more information, contact Carrie Giverson, OneSeven Agency, villaazur@onesevenagency.com.

Wynn Nightlife Announces Talent Lineup and Adds Date to its Popular Day-to-Night Music Series ‘Art of the Wild’
Wynn Nightlife announces the return of its highly anticipated day-to-night festival, Art of the Wild, March 18 – 21 at Wynn Las Vegas. In partnership with Framework, Wynn Nightlife welcomes celebrated brands CircoLoco, Elrow, Higher Ground, Animale, and Realm to its famous stages at XS Nightclub and Encore Beach Club. Reemerging for its fifth installation with a talent lineup that’s sure to bring down the house, Art of the Wild welcomes both returning favorites and fresh faces. RÜFÜS DU SOL, Damian Lazarus, Gorgon City, Claptone and more will grace the stage for another epic event. For the first time this year, the three-day series extends for an additional day, concluding the four days with a Tulum-inspired jungle party branded “La Selva” featuring music by Carnage’s house alias, Gordo. For more information, contact Krystle Anttonelli, Wynn Las Vegas and Encore, Krystle.Anttonelli@wynnlasvegas.com.

Luke Bryan Kicks off First-Ever Las Vegas Headlining Engagement
Country music superstar Luke Bryan recently debuted his exclusive Las Vegas headlining engagement, at the new Resorts World Theatre. The five-time entertainer of the year set the tone for his highly anticipated shows at Resorts World Las Vegas with an electric sold-out performance that had fans on their feet and rocking out to top hits such as “That’s My Kind of Night,” “One Margarita” and “Country Girl (Shake It for Me).” Due to incredible ticket demand, the country music star is adding nine new show dates to Luke Bryan: Vegas. The new dates are: June 15, 17, 18, 22, 24, 25; Aug. 31 and Sept. 3, 4. For more information, contact Nick Flynn, Allied Global Marketing, ResortsWorld@alliedglobalmarketing.com.

Usher Announces New Headlining Las Vegas Residency at Park MGM
Global megastar and eight-time GRAMMY Award-winner Usher will headline a new Las Vegas residency at Dolby Live at Park MGM, beginning Friday, July 15, 2022. Usher’s move to Dolby Live at Park MGM is the next generation follow-up to his extraordinarily successful 20-show Las Vegas residency in 2021, which sold-out every date, bringing in record grosses. Presented in partnership by Live Nation and MGM Resorts International, the show will be custom-designed for the expansive Dolby Live stage, allowing fans to feel like they are not just watching a performance, but are a part of it. The immersive new show will incorporate audience interaction and staging throughout the 5,200-seat entertainment venue, where every guest will have an up close and personal experience with the superstar. The exclusive, only-in-Vegas spectacular will be packed with an impressive repertoire of smash hits spanning the multi-talented showman’s 20-year career, as well as new music. For more information, contact Kelly Frey, KF Publicity, kelly@kfpublicity.com.

Wrangler NFR Payout Climbs to Record $14.1 Million in 2022
The Professional Rodeo Cowboys Association® and Las Vegas Events announced that the 2022 Wrangler National Finals Rodeo® will see an increase in the payout at the world’s largest rodeo in December for the second consecutive year. The Wrangler NFR, which is scheduled this year at the Thomas & Mack Center in Las Vegas Dec. 1-10, will have a record-setting competition payout of more than $10.9 million. This amount includes guaranteed prize money of $1.2 million for all NFR qualifiers and $9,700,098 in competition prize money. Between 2015 and 2020, the NFR paid out a total of $10 million – $8.8 million in competition prize money and $1.2 million in guaranteed prize money to qualifiers. The total purse increased to $10,257,048 in 2021. For more information, contact Michael Mack, Las Vegas Events, michael@lasvegasevents.com.

Derek Hough: No Limit to Return to The Venetian Resort Las Vegas
By popular demand, multi-talented entertainer, three-time Emmy Award winner and eleven-time nominee for Best Choreography, Derek Hough, is returning to The Summit Showroom stage at The Venetian® Resort with his show, Derek Hough: No Limit. Performances will be held Wednesday through Saturday at 7:30 p.m. beginning Wednesday, May 18 through Saturday, Sept. 10, 2022. The dance-centric show will feature new elements and dance numbers designed specifically for the astounding versatility of The Summit Showroom, and, as always, Derek's magnetic stage presence. Fans will journey through a true fusion of dance and music, as Derek explores styles ranging from ballroom and tap to salsa, hip-hop and everything in between. For more information, contact Kelly Frey, KF Publicity, kelly@kfpublicity.com.

Cheapshot to Open This Spring, Bringing Down ‘n’ Dirty Entertainment to Downtown Las Vegas
Come one, come all to Cheapshot, a palace of varieties at 517 E. Fremont St. Suite 100 opening in early April. Presented by the notorious “Miss Behave” Amy Saunders, and Corner Bar Management, the creators behind some of Vegas’ most imaginative destinations, Cheapshot will showcase loose, live, and down ‘n’ dirty entertainment. Cheapshot will reign as the most intimate showroom and discotheque in Las Vegas at 3,000 square feet with seating for 99. Elegant booths and plush seating will surround the stage, which will present an ever-changing lineup of bawdy performances. Bartenders will serve cheap, stiff drinks with a wink and a grin, priming the audience for a night of irreverent entertainment. For more information, contact Torrey Bailey, Wicked Creative, CornerBar@WickedCreative.com.

L.A. Comedy Club to Continue to Bring Big Laughs with its Bigger Dragon Room
The award-winning L.A. Comedy Club has cemented its home at The STRAT Hotel, Casino & SkyPod with its recent move to a bigger, brand-new Dragon Room. Known as the spot “where comedy comes to party,” the long-running comedy club’s new, custom-built showroom adds more than 100 seats with a 270-seat showroom right off the main casino floor. The new 5,700-square-foot showroom welcomes guests with a separate bar and lounge inside the main entrance to enjoy drinks before and after shows. Inside the showroom, which has an awning of low-hanging acoustic panels and a curtain allowing flexibility to seat from 120 to 270, is a second bar, plus chairs and booth seating. For more information, contact Richard Robinson, Wicked Creative, LACC@wickedcreative.com.

The Downtown Loop Adds New Stop for Popular Brewery Row
The Downtown Loop, a free shuttle servicing popular attractions in the city core, recently added a new stop for Brewery Row. The newest stop for the service is in the 1500 block of South Main Street, allowing quick and easy access to the popular Brewery Row. The new Brewery Row stop joins existing stops that include Circa, The STRAT, Symphony Park, City Hall, The National Museum of Organized Crime and Law Enforcement, and more. To see all the stops, visit www.lasvegasnevada.gov/downtownloop. The city has offered incentives to attract craft breweries, wineries, wine rooms, tap rooms and distilleries downtown to be part of Brewery Row. The 18B Las Vegas Arts District now has seven breweries and three tap rooms, and more are on the way. For more information, contact Jace Radke, city of Las Vegas, jradke@lasvegasnevada.gov.

Adam London’s Laughternoon ‘Quacks Up’ Audiences with New Residency at The Orleans Hotel & Casino
Rubber duck-obsessed comedy magician Adam London returns to the Las Vegas stage this month with a new residency at “The Venue” inside The Orleans Hotel & Casino. London’s Laughternoon, an hour-long family-friendly show replete with astonishing sleight of hand and good-humored hilarity, is presented by Ivory Star Productions and runs Thursday through Sunday at 4 pm. Having perfected his craft in comedy clubs throughout the globe, including the world-famous Magic Castle in Los Angeles, the Southern Utah native has been charming Las Vegas showgoers of all ages for nearly a decade with the performer’s unique blend of wit and whimsy -- while incorporating an inordinate number of his trademark rubber ducks into the side-splitting spectacle.For more information, contact Jeremy Lettiere, Ivory Star Productions, Jeremy@ivorystar.com.