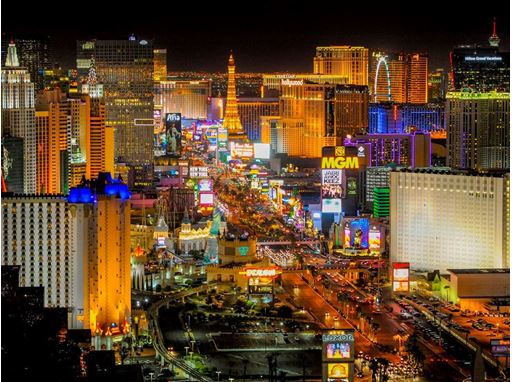 Virgin Hotels Las Vegas Now Accepting Reservations
Reservations at the reconceptualized Virgin Hotels Las Vegas, part of the Curio Collection by Hilton™, are now being accepted at virginhotelslv.com. The resort’s over 1,500 chambers will draw on the property and city’s desert ambiance with neutral color palates and pops of color with distinctive touches, exclusive to Virgin Hotels and designed by Studio Collective. Each chamber will feature a specially designed format with two spaces, “The Dressing Room” and “The Lounge,” separated by a privacy door. Guests will enjoy Virgin Hotels’ patented ergonomically designed lounge beds, high-definition TVs, reading nooks and more and select chambers will be dog friendly. The property will feature three unique towers, Opal, Canyon and the all-suite Ruby Tower, offering guests a variety of experiences and each chamber will offer sweeping views of the Las Vegas Strip, surrounding valley or the property’s five-acre pool oasis. For more information, contact Terri Maruca, Kirvin Doak Communications, VirginHotelsLV@kirvindoak.com.

Spiegelworld Presents Behind-the-Scenes Look: Bringing Live Entertainment Back to the Stage Safely
One of Las Vegas’ most successful and outlandish theatrical producers, Spiegelworld is giving fans a rare peek behind the curtain with a new YouTube docuseries, VEGASHITSHOW. Adding to its first nine episodes weekly, the series documents the efforts of Spiegelworld’s creative team, cast, and crew to bring its shows – and its signature brand of irreverent fun – back to the stage safely. With thousands of jobs in the live entertainment industry still impacted by the pandemic, Spiegelworld’s daily battles offer a glimmer of hope as the circus goes to war against COVID-19. Each episode includes footage from top-level creative team and production meetings, artist rehearsals, interviews with company leadership, and more never-before-seen material. Episodes available on SpiegelworldTV hosted by YouTube. For more information, contact Thomas Judd, Kirvin Doak Communications, tjudd@kirvindoak.com.

Circa Resort & Casino Offers World's Earliest Check-In to First Hotel Tower Guests
Circa Resort & Casino – Las Vegas’ new adults-only casino-resort – is offering the first guests of its hotel tower the world’s earliest check-in in honor of Black Friday. Continuing through December, any guest who books a room or suite for December 28 – the official first night of reservations for the property – will be allowed to check into their room 48 hours early, starting December 26 at 3 p.m. Circa Resort & Casino, downtown Las Vegas’ first ground-up casino-resort in 40 years, opened its doors October 28 welcoming its guests to the first five floors of amenities, including its massive sportsbook with a 78-million-pixel screen; Stadium Swim, the country’s largest pool destination for sports fans; multiple original restaurant and bar concepts; a two-level casino; high-tech transportation hub, and more. December 28 marks the opening of Circa’s hotel tower and its rooftop lounge, Legacy Club. For more information, contact Kara Rutkin, Kirvin Doak Communications, krutkin@kirvindoak.com.

SAHARA Las Vegas Begins Restaurant Row Expansion
Enhancements to the resort experience continue to be made at SAHARA Las Vegas where construction walls have gone up to make way for the property’s new restaurant row slated to open next summer. The expansion is all part of SAHARA’s ongoing $150 million resort transformation and will include significant updates to its Strip-facing exterior. New additions include Chickie’s and Pete’s sports bar and crab house, which will open its first West Coast outpost at SAHARA Las Vegas. The Philadelphia-based concept is a favorite among both athletes and fans and is as popular for its unique sports bar experience as it is for its famous Crabfries and elevated bar cuisine. Renowned Chef Guoming “Sam” Xin, who joined SAHARA’s culinary team earlier this year to oversee the resort’s Chinese culinary offerings, will launch the highly anticipated Noodle Den featuring his popular hand-pulled noodles and dumplings. Two additional venues, an Italian restaurant and a new culinary concept, will be revealed later next year to round out the resort’s restaurant row. For more information, contact Emily Wofford, The Publicity Lab, sahara_pr@thepublicitylab.com.

Resorts World Las Vegas Partners with Zouk Group
Resorts World Las Vegas and Zouk Group recently announced a partnership to curate an ecosystem of immersive entertainment and lifestyle concepts at the $4.3 billion integrated resort, opening in summer 2021. Zouk Group, a leading lifestyle and entertainment company from Singapore, owns establishments spanning across the nightlife, entertainment, and food and beverage sectors. Through its partnership with Resorts World Las Vegas, Zouk Group will, for the first time, bring its immersive entertainment and dining concepts to the United States. Offering nearly 100,000 square feet of lifestyle and entertainment spaces, the resort’s four distinct environments will include Zouk Nightclub, an innovative space that will become the most technologically advanced nightclub in Las Vegas, and AYU Dayclub, an outdoor oasis inspired by the beauty and harmonious atmosphere of Southeast Asia’s idyllic islands; RedTail, a new-style social gaming bar where guests can enjoy premium beer, wine, cocktails and shared plates while playing a variety of games like beer pong, darts and pool; and FUHU a high-energy, experiential dining venue that tempts with an unexpected twist on contemporary Asian cuisine. For more information, contact Nicole Wozniak, Resorts World Las Vegas, nicole.wozniak@rwlasvegas.com.

Donny Osmond Returns to the Stage with First-Ever Solo Residency
Legendary entertainer and music icon, Donny Osmond, recently announced his return to Las Vegas and the Caesars Entertainment family with his first-ever solo multi-year residency inside Harrah’s Showroom at Harrah’s Las Vegas, opening August 31, 2021. In an unprecedented and history-making deal for Harrah’s, Osmond’s return to stage will be an exciting, energy-filled musical journey of his unparalleled life as one of the most recognized entertainers in the world. Guests can expect a party as he performs his timeless hits, shares stories of his greatest showstopping memories and introduces brand new music in a completely reimagined song and dance celebration. For more information, contact Robert Jarrett, Caesars Entertainment, RJarrett@caesars.com.

AREA15’s Gallerie 360 Offers Dazzling Drinks Experience
AREA15 invites the curious to immerse themselves in a space where audio and visual experiences collide by entering QuantumPlate by Gallerie 360. Located inside The Portal—AREA15’s 360-degree, 3D projection-mapped room—this nightly, 30-minute light and sound exhibition by world-renowned digital artists Darpan and Max Cooper merges art and technology inside 7,500 square feet of transformative space. Open to guests of all ages, Gallerie 360 provides the perfect setting for individuals or groups seeking to transport into a new dimension while sipping handcrafted cocktails or non-alcoholic beverages. Tickets are $20, which includes the 30-minute immersive projection-mapped show, entry into AREA15 and a beverage from the bar. Guests age 3 and younger enter for free, and alcoholic beverages will only be served with valid identification. Gallerie 360 is open each night unless otherwise noted. Gallerie 360 is the first immersive experience to debut inside The Portal, which can also accommodate viewing parties, immersive dining experiences, as well as corporate and private events. For more information, contact Desiree Webb, The Vox Agency, desiree@thevoxagency.com.

Vegas Golden Knights and adidas Unveil Reverse Retro Jersey
The Vegas Golden Knights and adidas recently unveiled an all-new Reverse Retro jersey. The jersey will be added to the current rotation and will be worn periodically throughout the season. Inspired by the pioneers of hockey in the desert, the Golden Knights Reverse Retro jersey pays homage to the teams and players that paved the way in Vegas while breaking new ground for the Knights. The red color is a reference to the Wranglers, who played in Vegas from 2003-2014. The striping is inspired by the Thunder, whose V-for-Vegas body stripes graced the strip from 1993-1999. The year ’95 appears in the back neck to commemorate the Thunder’s best season in 1995-1996 and Manon Rheaume, the first woman to play in the NHL, who wore the Thunder’s V-stripes during the 1994-95 season. For more information, contact Sage Sammons, Vegas Golden Knights, ssammons@vegasgoldenknights.com.