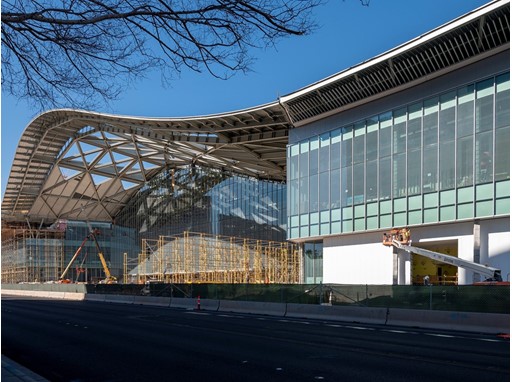 LAS VEGAS — Construction workers on behalf of the Las Vegas Convention and Visitors Authority (LVCVA) commenced the extensive process of pouring 600,000 square feet of concrete flooring in the main exhibit hall in the new West Hall expansion of the Las Vegas Convention Center (LVCC). The process will take between four and five months to complete and is a major step forward in the expansion construction, which is now 77 percent complete.

Concrete Pour & Expansion by the Numbers

• 75 million lbs. of concrete used to fill the exhibit hall floor. This will require approximately 1,800 trips by fully loaded concrete trucks.
• The exhibit hall floor is a 10-inch reinforced concrete slab, capable of supporting the LVCVA’s largest trade show exhibits.
• The concrete pour will take four to five months to complete
• The Exhibit floor includes plumbing, electrical, and data infrastructure so exhibitors can connect without the use of on ground wiring
• 2,173,337: Hours of work crews have logged since construction began in 2018
• 1.4 million: Square feet of space the LVCC expansion will add to the existing 3.2 million square feet of space at the LVCC
• 333: Number of volleyball courts the 600,000 square-foot expansion hall could accommodate
• 328,000: Square feet of space in the new exhibit hall that will be column-free, the largest column-free space in North America

ABOUT THE LVCVA The Las Vegas Convention and Visitors Authority (LVCVA) is charged with marketing Southern Nevada as a tourism and convention destination worldwide, and also with operating the Las Vegas Convention Center. With nearly 150,000 hotel rooms in Las Vegas alone and more than 11 million square feet of meeting and exhibit space citywide, the LVCVA's mission centers on attracting ever increasing numbers of leisure and business visitors to the area. For more information, go to www.lvcva.com or www.visitlasvegas.com.