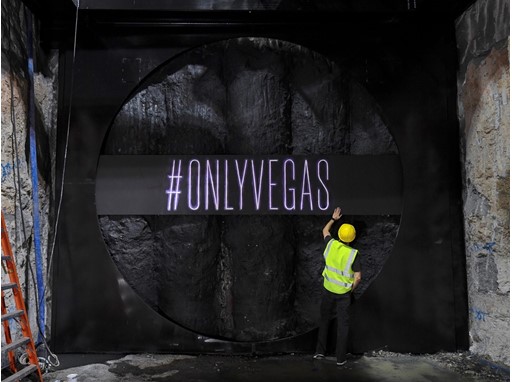 LAS VEGAS – The Las Vegas Convention and Visitors Authority (LVCVA) today announced that excavation is complete in the first of two vehicular tunnels that will comprise TBC - The Boring Company d/b/a Vegas Loop underground transportation system located beneath the Las Vegas Convention Center campus. After tunneling forty feet underground for nearly a mile over the past three months, the boring machine hours ago broke through the concrete wall located near the 1.4 million square foot West Hall convention center expansion, currently under construction, signaling the official completion of excavation for the first of two one-way tunnels.

The Convention Center Loop was designed to serve as an innovative, fun and quick transportation solution to move thousands of convention attendees throughout the more than 200-acre campus with the potential for expansion in the near future to ease congestion throughout the Las Vegas resort corridor.

Next, the machine will be disassembled, transported via trucks and lowered back into the launch pit near the Convention Center’s South Hall where it will begin boring a parallel path adjacent to the first tunnel. The first commercial endeavor for the new tunneling company is designed to transport up to 4,400 convention attendees per hour and is scheduled to debut to the public in January 2021.

“This marks an important milestone in the future of transportation,” said Steve Hill, LVCVA CEO and president.  “Las Vegas is proud to lead the way as the first and only destination to offer an underground transportation solution for moving visitors throughout our convention center.”

The $52.5 million underground transportation system will include three passenger stations connecting the existing 3.2 million square-foot of convention space with the convention center’s new West Hall, part of a $1.52 billion expansion and renovation. The system will allow convention attendees to be whisked across the sprawling campus in just over one minute, free of charge, in all-electric Tesla vehicles.

ABOUT THE LVCVA
The Las Vegas Convention and Visitors Authority (LVCVA) is charged with marketing Southern Nevada as a tourism and convention destination worldwide, as well as operating the Las Vegas Convention Center.  With nearly 150,000 hotel rooms in Las Vegas alone and approximately 12 million square feet of meeting and exhibit space citywide, the LVCVA's mission centers on attracting ever increasing numbers of leisure and business visitors to the area. Download the virtual reality app, Vegas VR, to experience Las Vegas from your iPhone or Android by visiting http://www.vrtv.vegas/. For more information, go to www.lvcva.com or www.visitlasvegas.com.