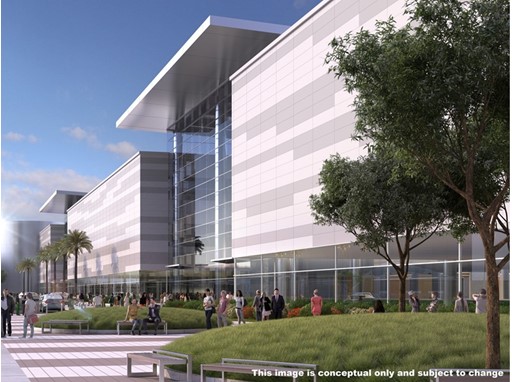 LAS VEGAS -- Today, the Las Vegas Convention and Visitors Authority (LVCVA)’s Board of Directors gave final approval for the expansion and renovation of the Las Vegas Convention Center in a historic decision that secures Las Vegas’ position as the world’s premier business destination.
“Today marks a monumental occasion for not only the LVCVA but also the entire destination,” said Rossi Ralenkotter, LVCVA President and CEO. “We commend the foresight of our community and state leaders for recognizing the importance of the LVCCD and we are eager to get to work! We will ensure that the LVCVA continues to provide the world-class facility and experience our clients expect when they come to Las Vegas.”
Prior to being presented to the full LVCVA Board, the plan recently met the approval of both the Oversight Panel for Convention Centers in Clark County and the Las Vegas Convention Center District (LVCCD) Committee, a sub-committee of the LVCVA Board of Directors.
LVCVA staff worked in partnership with Cordell Corporation principal Terry Miller, the agency’s contracted builder representative, to develop the vision for the expansion and renovation project.
Nevada State legislators and Nevada Governor Brian Sandoval approved a bill during a 2016 special legislative session paving the way for development of the Las Vegas Convention Center District. The expansion and renovation project will add 600,000 square feet of new meeting space ensuring Las Vegas remains the No. 1 trade show destination for decades to come. The legislation established a 0.5 percentage point increase in Clark County’s room tax to help fund the Las Vegas Convention Center District. The legislative session followed a 14-month vetting process by the Southern Nevada Tourism Infrastructure Committee, a group created by Governor Sandoval to review several projects critical to the future of Southern Nevada.
“Las Vegas has maintained its reputation as a leading destination for business travel because our destination has a long tradition of working together to make great strides that benefit both our visitors and those who call Southern Nevada home,” said Lawrence Weekly, chairman of the Las Vegas Convention and Visitors Authority and Clark County Commissioner. “The LVCCD project is among the most thoroughly vetted, most approved projects in this region and it represents a tremendous opportunity to create jobs, support local families, stimulate our economy and continue to move Las Vegas forward.”
The convention center expansion and renovation is expected to support nearly 14,000 construction jobs and nearly 7,800 full-time permanent jobs upon completion. The project is expected to generate $2.1 billion in construction-related local economic impact and have an annual incremental economic impact of $810 million while attracting 610,000 new convention attendees per year.
The LVCCD expansion and renovation will be completed in a phased approach with a projected completion date of 2023. Phase 1 will be the construction of the new 1.4 million-square-foot expansion with 600,000 square feet of exhibit space and the accompanying meeting rooms and support space. This phase is projected to be complete by 2021. The second phase will be the complete renovation of the existing 3.2 million-square-foot facility. The phased approach will ensure that no business will be displaced during the construction and renovation.
The project will allow the Las Vegas Convention and Visitors Authority to pursue new business opportunities while also growing the shows currently taking place in the destination. The LVCVA has identified new events that could potentially be brought to the destination in the next decade. These shows would continue to grow the economic impact of Southern Nevada’s $12.4 billion meetings and conventions industry.
Following the plan’s approval from the LVCVA Board, the organization will begin soliciting submittals of qualifications from local, regional and national architectural professionals. The request for qualifications will identify the criteria that must be met to be considered to provide design services for the LVCCD. Qualifying firms and/or teams will be asked to submit proposals detailing specific information regarding their approach to the project. Finalists will deliver public presentations in a Design Competition before a firm/team is selected. The LVCVA will also commence the selection process for a construction manager.
Parties interested in participating in development of the LVCCD should visit http://www.lvccdistrict.com/.
Las Vegas as a Business Destination
ABOUT THE LVCVA
The Las Vegas Convention and Visitors Authority (LVCVA) is charged with marketing Southern Nevada as a tourism and convention destination worldwide, and also with operating the Las Vegas Convention Center and Cashman Center.  With nearly 150,000 hotel rooms in Las Vegas alone and more than 11 million square feet of meeting and exhibit space citywide, the LVCVA's mission centers on attracting ever increasing numbers of leisure and business visitors to the area. Download the virtual reality app, Vegas VR, to experience Las Vegas from your iPhone or Android by visiting http://www.vrtv.vegas/.   For more information, go to www.lvcva.com or www.visitlasvegas.com.