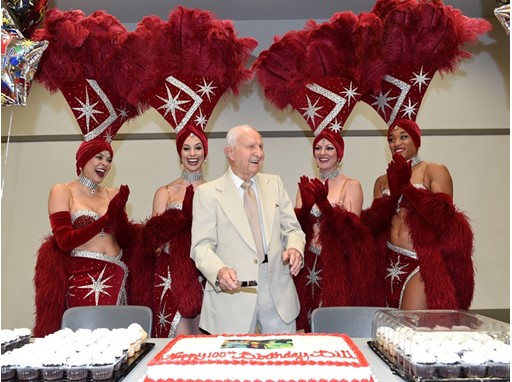 LAS VEGAS – During the August Las Vegas Convention and Visitors Authority (LVCVA)’s board of directors meeting, employee Bill Darwin was recognized for his upcoming 100th birthday in a surprise presentation. Darwin will officially celebrate the milestone on August 19.
An LVCVA employee since September 2008, Darwin works for the organization’s registration services to help staff various meetings, events and trade shows throughout the destination. He has worked for 102 shows in the destination via the LVCVA.
“I believe tourism is the backbone of Las Vegas, and I love working at the conventions and meeting the people who come to shows here – it keeps me young and in good health,” Darwin said. “Las Vegas is such a wonderful place, and I hope I get to keep working at shows for another five or 10 years.”
In addition to recognizing Darwin’s birthday, the LVCVA honored him for the incredible customer service he provides to Las Vegas’ visitors.
“Bill Darwin is the personification of the commitment to excellence that defines Las Vegas as the world’s greatest place to do business,” said Rossi Ralenkotter, president/CEO of the LVCVA. “Year after year, convention customers specifically request that Bill work their shows and events, and those customers have gone out of their way to celebrate this milestone birthday throughout the first half of this year. We are honored to have Bill as part of our LVCVA family.”
Earlier this year, Darwin was featured in a special edition of the LVCVA’s “Tourism Matters” video series. His video has received millions of views on social media. Watch the video here: https://www.youtube.com/watch?v=NVFNDv0XZQg
Prior to working at the LVCVA, Darwin honorably served the United States Navy during WWII and Pearl Harbor. He also held the office of city manager in Everman, Texas, working for city government for nearly 30 years.
Additional video of the LVCVA’s special recognition for Bill during the organization’s August board of directors meeting can also be found at this link: https://www.youtube.com/watch?v=OmxUGNeGVj4 .