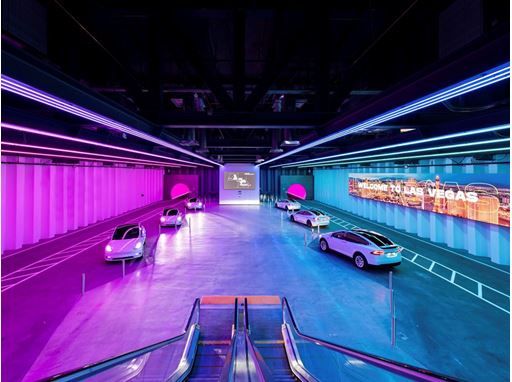 The $52.5 million system will serve as a fun and quick way to move convention attendees throughout the more than 200-acre campus, all 40 feet beneath the ground in all-electric Tesla vehicles. Plans have been announced to develop an expanded system throughout the resort corridor, known as the Vegas Loop, which will ease traffic congestion and offer a new transportation option for visitors from as far north as Downtown Las Vegas, throughout the Strip and as far south as Allegiant Stadium.

"We are excited to have partnered with Elon's company to bring this transportation 'first' to our valued convention customers," says Steve Hill, LVCVA president and CEO. "The expanded Loop system, when developed, will be a game-changer and a new 'must experience' attraction for our visitors."

The company constructed two one-way, .8-mile vehicular tunnels and three passenger stations to connect the existing convention center campus to the 1.4 million square foot West Hall expansion. The system will allow up to 4,400 convention attendees per hour to be whisked across the sprawling campus in just under two minutes, free of charge. By foot, the walk would take approximately 25 minutes. Instead, passengers are carried in all-electric Tesla vehicles to their destination. Vehicles have capacity to go 150 mph but will travel at 35-40 mph due to the short distance of the tunnels. The system will be staffed with drivers initially with the plan to operate them autonomously in the future.

"We're grateful to LVCVA and all local stakeholders for providing us the opportunity to construct our first commercial project in one of the world's most dynamic destinations," says Steve Davis, president, The Boring Company.  "We are proud to have developed and delivered an exciting transportation solution to the Las Vegas Convention Center."

The creation of the underground transportation system was born out of Musk's desire to solve the problem of traffic gridlock. As a result, the company is focused on building low-cost, fast-to-build underground transportation systems to alleviate traffic congestion. Going underground has several advantages as tunnels are structurally safe, weatherproof, noise-free and can meet growing capacity by easily adding multiple levels.

The LVCVA moved from board approval to the excavation of both tunnels in less than one year, and fully developing the system in a year and a half, proving that Las Vegas embraces new ideas and executes them quickly. The tunnels measure 13.5 feet outer diameter and 12 feet inner diameter. The Loop system includes a command center to monitor the system to assure a safe and comfortable experience.

The Las Vegas Convention and Visitors Authority (LVCVA) is charged with marketing Southern Nevada as a tourism and convention destination worldwide and with operating the 4.6 million square-foot Las Vegas Convention Center (LVCC). With nearly 150,000 hotel rooms and 14 million square feet of meeting and exhibit space in Las Vegas alone, the LVCVA's mission centers on attracting leisure and business visitors to the area. The LVCVA also owns the Las Vegas Convention Center Loop, an underground tunnel designed by The Boring Company and also owns the Las Vegas Monorail, an elevated 3.9-mile system with seven stops throughout the resort corridor. Both transportation systems will operate when conventions reconvene.