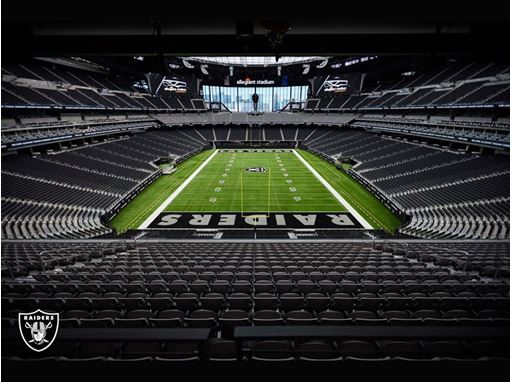 Fall marks the return of football season, and there is no better place to catch a favorite team than Las Vegas. The destination has the perfect spot for all fans and visitors with an array of deals, specials and food and drink packages.

For People Who Actually Watch the Game

Circa Resort & Casino boasts the larges sports betting experience in the world, Circa Sports, with a 78-million-pixel screen for the ultimate viewing experience. There is no bad seat in the house, with a three-story, technologically advanced sportsbook and an overhanging bar with a combined capacity of up to 1,000 people. Fans can also head outside to Stadium Swim to watch a game on a 143-square-foot screen.

For Being in the Action

Get in on the blood, sweat and tears as Allegiant Stadium welcomes fans for the first time this football season as the home of the Las Vegas Raiders. The Silver and Black will kick off on Sept. 13 vs. the Baltimore Ravens, followed by nine home games throughout the season. College football fans will also mark their first year in the stands at Allegiant Stadium this year with the UNLV Rebels kicking off their season on Sept. 2. Later this year, Allegiant Stadium will host the 2021 Las Vegas Bowl on Dec. 30, where depending on the year you can catch your favorite Pac-12 team playing either the Southeastern or Big Ten conferences.

The newly opened Stadia Bar at Caesars Palace was inspired by sports fans, from the net-like chandeliers to baseball sconces and other touches throughout. The lavish lounge presents a large selection of classic libations, specialty cocktails, and incredibly rare spirits like Kentucky Owl, Pappy Van Winkle and exclusive barrel picks direct from the distiller.

For Fun in the Sun

Every Sunday, The Cosmopolitan of Las Vegas’ Marquee Nightclub & Dayclub will transform into a football oasis. Lounge poolside or take a dip while catching the action on the big screen, complete with bottle service, game-day eats, refreshing beverages and a DJ.

Resorts World Las Vegas, the newest casino resort on the Strip, is home to Dawg House Saloon & Sportsbook where football fans will find draft beers, cocktails and American fare with a Southern twist. And for those looking for something other than the game, the resort is home to AYU Dayclub with an exotic Southeast Asian feel and resident DJs Zedd and Tiësto, among others.

Making its debut this year at Virgin Hotels Las Vegas, Money, Baby!, is the first of its kind and combines the best of Vegas – sports viewing, culinary, betting, entertainment and nightlife. With 15,000 square feet indoors and 5,500 square feet outdoors overlooking the Virgin Pools, Money, Baby! has two DJ booths, state-of-the-art golf simulators, shuffleboard and other games, 360-degree viewing experience and in-venue sportsbook. DJs spin during commercials and other breaks, taking game day to the next level.

The home-team hotspot is Raiders Tavern & Grill at M Resort Spa and Casino. Become immersed in silver and black with décor and memorabilia celebrating the rich history of the Raiders. Serving American fare and stadium favorites, this is the perfect spot for locals, Raiders fans and lovers of the great game of football.

Treasure Island will launch the TI Super Fan Shuttle, a roundtrip service that will transport fans to and from TI and Allegiant Stadium for all home games duing the regular season. The non-smoking deluxe motorcoach features comfortable seating and wi-fi, running every 30 minutes before and after games. Start the pre-game festivities early with drink specials at Treasure Island's Golden Circle Sportsbook & Bar and celebrate the win or forget the loss at Gilley's Saloon, Dance Hall & Bar-B-Que or Breeze Bar.

Catch all the action with game day bottle service at Electra Cocktail Club at The Venetian Resort Las Vegas during Thursday, Sunday (after 1 p.m.) and Monday football games. A 40-foot, 70-million-pixel digital screen provides an up-close viewing experience with the renowned hospitality of Electra’s staff serving packages for 4 – 10 guests that includes a bottle of your favorite spirit and mixers, beers by the bucket and Moon Palace Sliders and Hot Chips.

For Not Breaking the Bank

Podcaster Raider Cody will broadcast live from CASBAR Lounge inside SAHARA Las Vegas every Raiders home game, and fans will get a kick out of the associated discounts on room rates, with food and beverage credit and complimentary room upgrade available. In addition, CASBAR has drink specials and will have a popup Black Sunday shop.

For a full list of locations or to book your Las Vegas adventure, visit www.VisitLasVegas.com.